From Webmin Documentation
(Redirected from ScheduledCronJobs)
Jump to: navigation, search

A Cron job is a Unix term for a command that is run on a regular schedule by the cron daemon. Each job is owned by a Unix user, and runs with the permissions of that user. Each has a set of minutes, hours, days, months and days of weeks on which it runs, allowing considerable flexibility in scheduling. For example, a job may run every 10 minutes, or at 3 am every day, or at 5pm Monday to Friday in January, February and march.

Cron jobs are very useful for performing regular system tasks, such as cleaning up log files, synchronizing the system type, backing up files and so on. Most Linux distributions will have several Cron jobs that were setup by default as part of the operating system install process for doing things like removing unneeded kernel modules, updating the database used by the locate command and rotating log files. 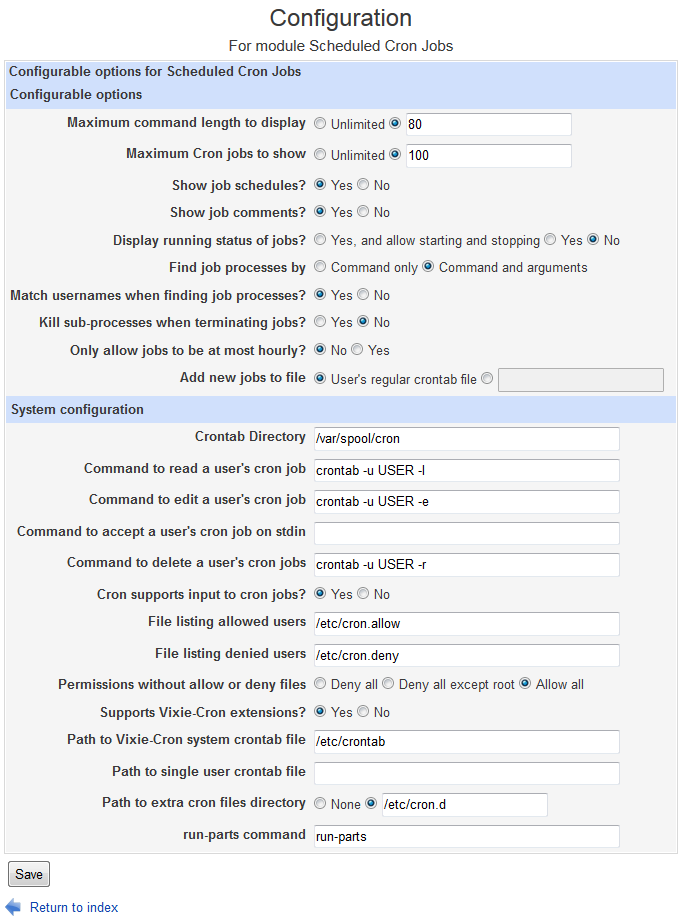 If a package like 'anacron' is used on the server a few more directories will be used by the cron system but most likely going unnoticed by Scheduled Cron Jobs.

The Webmin module for editing Cron jobs can be found under the System category. When you enter it, the main page displays a table of all the existing jobs on your system as shown below. For each action, the owner, active status and command are listed. If the command for a job is too long, it will be truncated for display on the page. 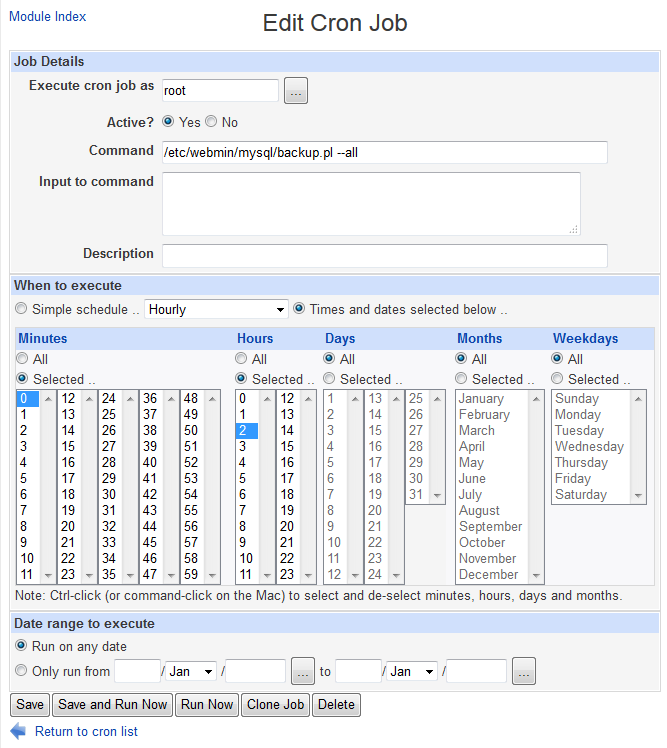 Using Webmin, you can easily create a new Cron job that will execute as any Unix user on your system. To steps to follow to achieve this are:

Existing Cron jobs, including those created by users, through Webmin or included with your operating system, can be edited and re-scheduled using this module. Be careful when editing jobs that came as part of your distribution though, as some perform important tasks like truncating webserver, mail and login log files so that they do not use up all of your disk space. To edit an existing job, the steps to follow are:

Existing Cron jobs can be deleted by following the steps above, but clicking the Delete button instead of Save. You can also force the immediately execution of a job by clicking the *Run Now* button on the edit page, which will execute the command and display any output that it produces.

The Scheduled Cron Jobs module can also be used to control access to the crontab command by Unix users at the command line. This can be useful if you all un-trusted users to login to your system, and want to prevent some of them from setting up Cron jobs to run commands and take up CPU time when they are not logged in. Usually by default, all users will have the ability to create Cron jobs, but to change that the steps to follow are:

If a user has been denied access to Cron, you will no longer be able to use the module to create, edit or delete jobs belonging to him. However, existing jobs may continue to execute!

As described in Webmin Users, it is possible to use the Webmin Users module to control which Unix users a Webmin user can edit Cron jobs for. To set this up, you must first grant the user access to the module, then follow these steps:

Most of the module settings that you can view by clicking on the Module Config link on the main page are set by default to match the installed operating system, and vary rarely need to be changed. However, there is one field that effects the module's user interface, shown in the table below:

Cron is available on almost all Unix systems, with very similar capabilities. That means that this module appears almost identical on all operating systems, with only a couple of minor differences. On some, there is no Input to command field available for when creating or editing a job. On others, when controlling which users have access to Cron the default Allow all users option will be replaced with Allow all users except root or Deny all users.

Internally, other operating systems use different directories for storing Cron jobs - Solaris for example uses /var/spool/cron/crontabs instead of /var/spool/cron on Linux. Most other systems do not have an /etc/crontab file or /etc/cron.d directory either. However, when using Webmin you do not have to bother about these differences, as it knows about the paths used by other Unix variants and displays all Cron jobs using the same interface, no matter which file they are stored in.