This page explains how to set your systems IP address, hostname, DNS servers and other network settings. It covers both Linux and other Unix variants.

To view the interfaces that are currently active on your system, click on the Network Interfaces icon on the main page of the module. This will take you to the page shown in Figure 16-1, which lists interfaces on your system in two categories. At the top under Interfaces Active Now are those that are currently enabled and have an IP address assigned. All loopback, Ethernet and PPP interfaces will be shown, although not all will be editable using Webmin. At the bottom under Interfaces Activated at Boot Time are those which have been configured to be activated at boot. The two lists will not necessarily be the same, as some types of interface (such as PPP) are not activated at boot time and so will not appear in the second list.

The steps to follow to change the IP address, active status or other details of an interface are: 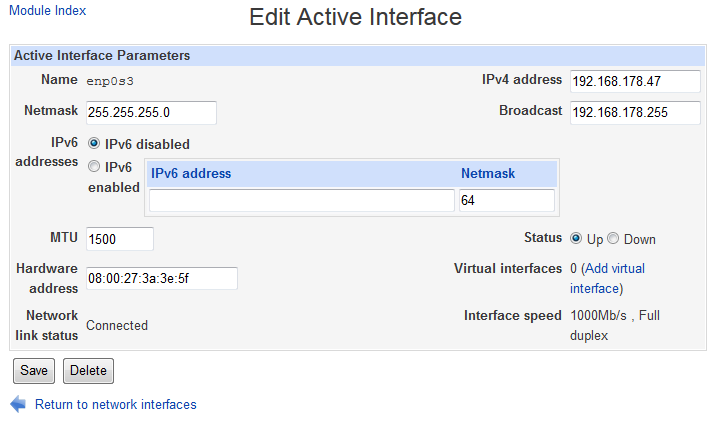 After changing any of your system's IP addresses, be sure to update any host address entries associated with them as well. See the Editing host addresses section below for details on how to do this. You may also need to update records in your DNS server as well.

There are two situations in which you might want to add a new network interface - if your system has just had a network card installed, or if you are adding an additional virtual IP address to an existing interface. In the latter case, the new virtual interface is not associated with its own separate network card, but instead adds an additional IP address to an existing Ethernet card. Virtual addresses are often used on systems hosting multiple websites, so that each site can have its own IP address.

Before an interface for a new network card can be configured, you must make sure that it is recognized by the Linux kernel and the appropriate kernel module loaded. There is no support in Webmin for doing this at the moment, but most distributions include a graphical tool for loading kernel modules, or a configuration file in /etc that specifies which modules to load. Once the interface is recognized, the steps to configure it are:

Routing and Gateways at boot time 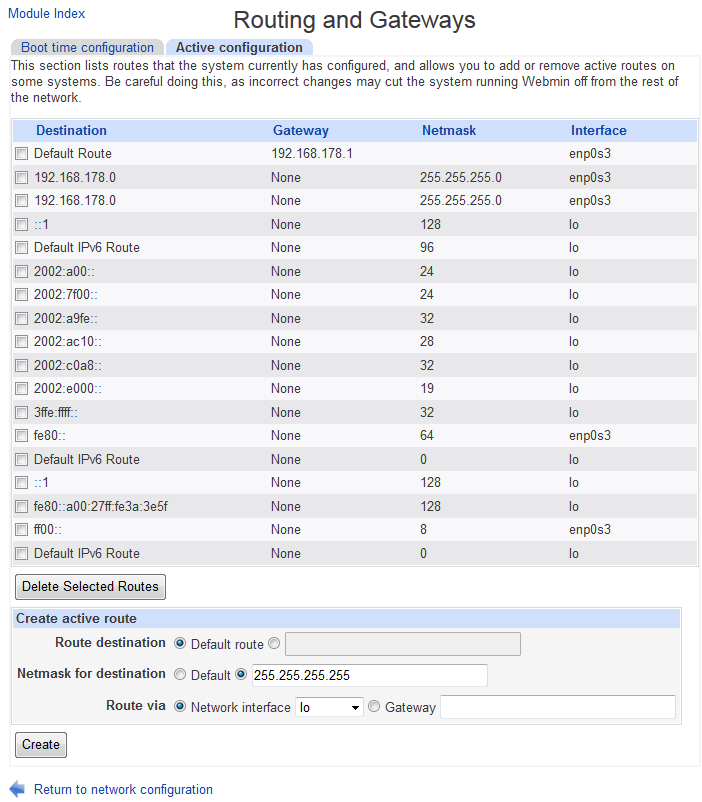 Any system attached to a large network needs to know the address of a default gateway, as explained in the introduction. In some cases, the system itself may be a gateway as well - perhaps forwarding data between a local area network and a dialup or broadband connection. In this case, it must be configured to forward incoming packets that are destined for some other address.

In some cases, traffic destined for certain networks may have to be sent via another router instead of the default gateway. Or if the more than one IP network shares the same LAN, traffic for any of those networks must be sent using the correct interface. If either of these are the case on your network, static or local routes need to be configured so that the system knows where to send packets for certain destinations.

To change the default gateway used by your system or enable packet forwarding, the steps to follow are:

If your system's primary network connection is via PPP dialup, then the default gateway will be assigned automatically when you connect and removed when you disconnect. Therefore there is no need to set it up using this form. 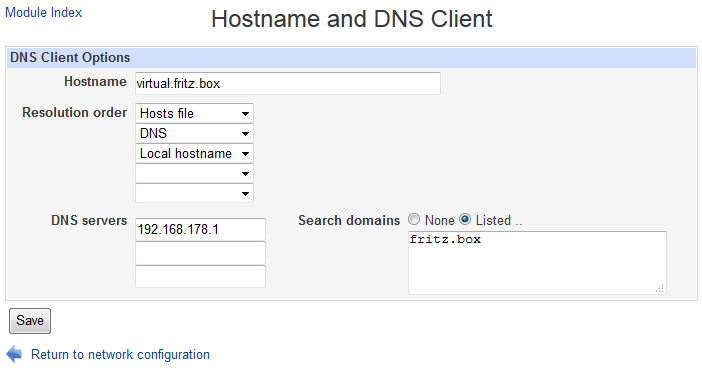 Every Unix system has a hostname, which appears in the login prompt, system logs, outgoing email and on every Webmin page. Normally the hostname is the same as or part of the DNS name for the system's IP address, but this does not have to be the case, especially if the system is not connected to a network or only connects occasionally via dialup. However, for permanently connected systems the hostname should be the hosts fully qualified DNS name (like server1.foo.com), or just the first part (like server1). Anything else is likely to cause confusion and possibly network problems.

When a Linux system is first set up, you get to choose the hostname as part of the distribution's installation process. However, it can be changed at any time, either using Webmin, a GUI tool provided by the distribution, or the hostname command. To make the change in Webmin, the steps to follow are:

As explained in the introduction to this chapter, in order to lookup hostnames and IP addresses your system will almost certainly need to know the addresses of DNS servers on the network. To change the system's DNS settings, follow these steps:

If your system's only network connection is via dialup, the DNS servers may be assigned automatically by your ISP depending on your PPP configuration.

Host addresses are mappings between an IP address and one or more hostnames that are stored in the /etc/hosts file on your system. Because they are stored locally, they can be looked up at any time, even when a DNS server is not accessible. On a small network with only a few systems, you may choose not to run a DNS server at all, but instead keep the addresses of every system in the hosts file on each system. In fact, this is what was done in the early days of the Internet before DNS was developed.

To view the addresses on your system, click the Host Addresses icon on the module's main page. There will always be an entry for localhost, and probably one for your system's hostname as well. If your system's IP address or hostname has been changed, the host addresses list will probably not reflect the change, which could cause problems. To change a host address, the steps to follow are:

You can add extra host addresses by clicking the *Add a new host address* link above or below the link and filling in the same form. There are no restrictions on the same hostname being associated with two different IP addresses, or the same IP address appearing twice in the list.

The IPv6 Host Address section is available if in the module's configuration [File listing IPv6 hosts and addresses] contains a valid file.

As Webmin Users explains, it is possible to limit the features of this module that a particular Webmin user or group can access. For example, you may want to allow a user to only edit the host addresses list, or only be able to view settings instead of editing them. To do this, create or edit a Webmin user who has access to the module, and then follow these steps:

Be very careful giving an un-trusted user the rights to edit any network configuration in this module, as he may be able to figure out a way to gain root access or disrupt other users by changing routes, host addresses or interface settings.

The Network Configuration module is also available on several other operating systems, with fairly similar options to Linux. Due to the different features supported by network configuration files on other versions of Unix, in some sections the user interface is quite different. The supported systems and the variations between them and Linux are: