Secure Shell or SSH is a protocol for securely logging in to and transferring files between computers over a network. All SSH traffic is encrypted so that anyone listening in on the network cannot capture passwords, which is a vast improvement over the insecure telnet and FTP protocols. In a way, SSH can be thought of as a secure replacement for those protocols, although in fact it can be used for much more.

An SSH server is a daemon process that runs on a Unix system waiting for connections. An SSH client is a program run by a user (or from a script) that connects to a server to start a remote login session or transfer some files. Both the client and server authenticate themselves to each other, so that each can be sure that of the others identity. Client authentication is done either with a username and password or a username and private key, while server authentication always uses a key.

There are many different SSH clients and servers available, but the two most common client/server packages on Unix systems are the freely available open-source OpenSSH and the original commercial SSH. In addition there are two different versions of the protocol that are not compatible, versions 1 and 2. Fortunately the latest releases of both packages support both versions.

The directory /etc/ssh contains all the configuration files used by both SSH servers, and even though the filenames are the same their formats are slightly different. The primary file is called sshd_config, and consists of a series of directives, one per line. As is usual with Unix server configuration files, each sets some option such as the list of denied users or the IP address to listen on. The same directory also contains the file ssh_config, which sets options that apply to the SSH client programs (such as ssh and scp) run on your system. Both files are directly edited by the Webmin module covered in this chapter.

This chapter deals with the configuration of the commercial SSH and OpenSSH servers, and assumes that you have a basic knowledge of the client programs as a user. The Webmin module that can be used to carry out this configuration is named SSH Server can be found under the Servers category. Clicking on its icon will take you to the main page shown in the image below, assuming that the SSH package is installed. 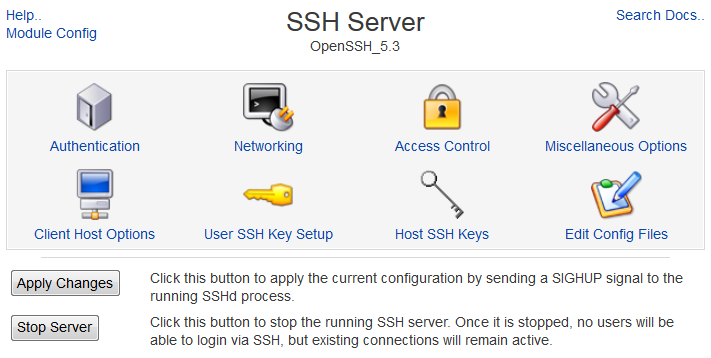 If an error message like The SSH server config file /etc/ssh/sshd_config was not found on your system appears instead, there is probably no SSH server is installed on your system. Most modern Linux distributions come with an OpenSSH package, so check your distribution CD or website for any packages whose names start with openssh or ssh. Often there will be several, such as openssh, openssh-client and openssh-server, all of which should be installed. You may also need to install the OpenSSL library as well, which should also be available in package form. Use the Software Packages module check for and install everything that is needed.

If no SSH package exists for your operating system, you will need to download, compile and install the OpenSSH or commercial SSH source code. As you might expect, OpenSSH can be found at http://www.openssh.org/, while the original SSH can be downloaded from http://www.ssh.com/. Installing should be easy on any Unix operating system, assuming you have a compiler installed. The only dependency is an SSL library like OpenSSL, which can be downloaded from http://www.openssl.org/.

After installation, you should make sure that the SSH server will be started at boot time. This can be done by using the Bootup and Shutdown module to create an action that runs the sshd command when started. If there is already an action named sshd or ssh-server, all you will need to do is make sure that it is enabled.

No matter how you install the SSH server, it should allow clients to login and transfer files immediately using the default configuration, once the server process is started. In fact, on a typical system very little configuration is needed at all as the defaults are suitable for the average server.

The two different SSH implementations and their many versions all have slightly different configuration file formats, which the module needs to adapt itself to. This means that the forms and fields that make up its user interface are not always the same, depending on the version and type of server that you have installed. The instructions and screenshots in this chapter have been written with OpenSSH version 2.5 in mind, but any differences or extra features that other SSH versions have will be mentioned as well.

The main page will always display six icons though, under each of which is a form containing fields for setting options related to some category, such as authentication or networking. At the top the implementation and version of SSH installed is displayed, so that you can see which of the instructions in this chapter apply to your system. At the bottom is a button labeled Apply Changes which when clicked signals the SSH server to re-read its configuration file. No changes made in the module will take effect until you hit this button. 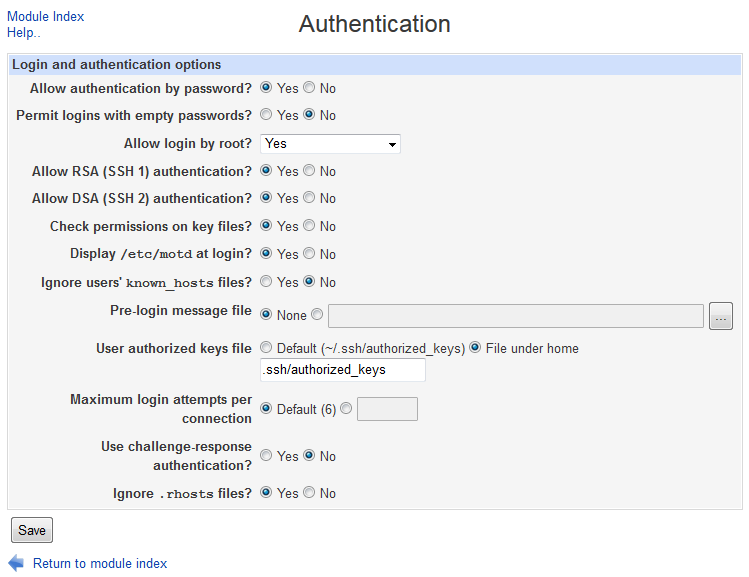 All SSH implementations have options related to how clients authenticate and the messages displayed to them after login. Specifically, you can permit or deny authentication by username and password or username and certificate, stop the root user logging in, and control if rlogin-style .rhosts files are trusted. The exact options differ quite a lot between SSH versions though, so what is possible with OpenSSH may not be if you are running the commercial SSH server.

To edit authentication settings, the steps to follow are: 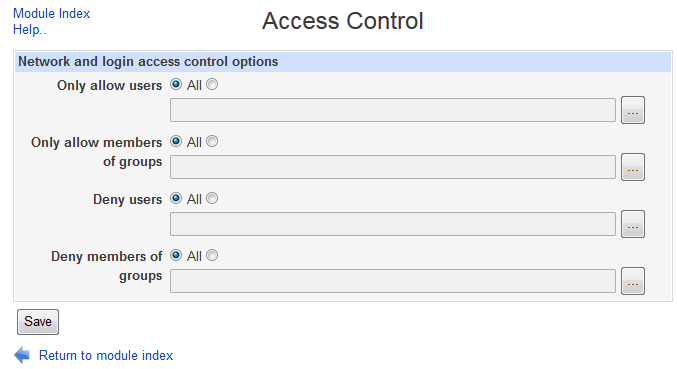 By default, any Unix user will be allowed to remotely login to the SSH server on your system, or use it to upload and download files. On a mail server system or one that hosts websites this may not be appropriate though - you might want to allow most users to only login to your POP3, FTP or Usermin servers instead. Although it is possible to achieve this by giving them a shell like /bin/false, this could cause other problems with user Cron or At jobs.

Fortunately, the SSH server can be configured to restrict who can login. Just follow these steps: 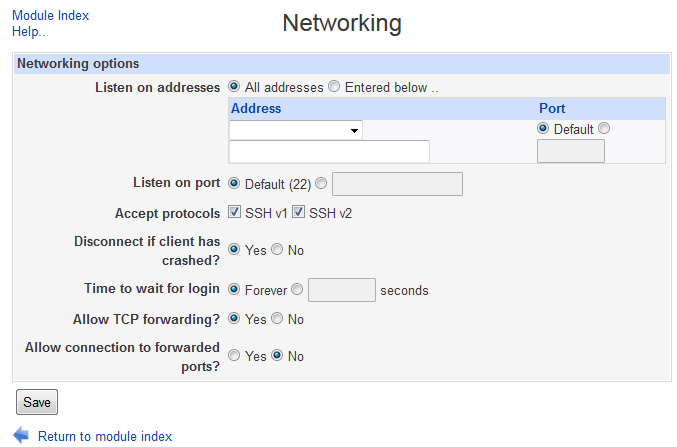 The SSH server has several options that allow you to configure the IP address it listens on, the port it uses and various protocol-related settings. To edit them, follow these steps :

Even though this module is primarily for configuring an SSH server, it also lets you set options that apply to all client connections made from your system using the ssh and scp commands. Options can be set for connections to all hosts, or just to a specific one. You can set the port to connect to, the protocol to use and local and remote ports to forward.

The settings made in this module apply to all users on your system, but can be overridden by individual users who edit their ~/.ssh/config files. This can be done manually or using Usermin, which has an SSH Client module with an identical interface to the one documented here for editing global client settings. Many of the settings do not make much sense to set for all users, even though it is possible to do so using Webmin. For this reason, the instructions in this section only cover fields that are useful on a global level.

To define settings for connections to a specific host, follow these steps: 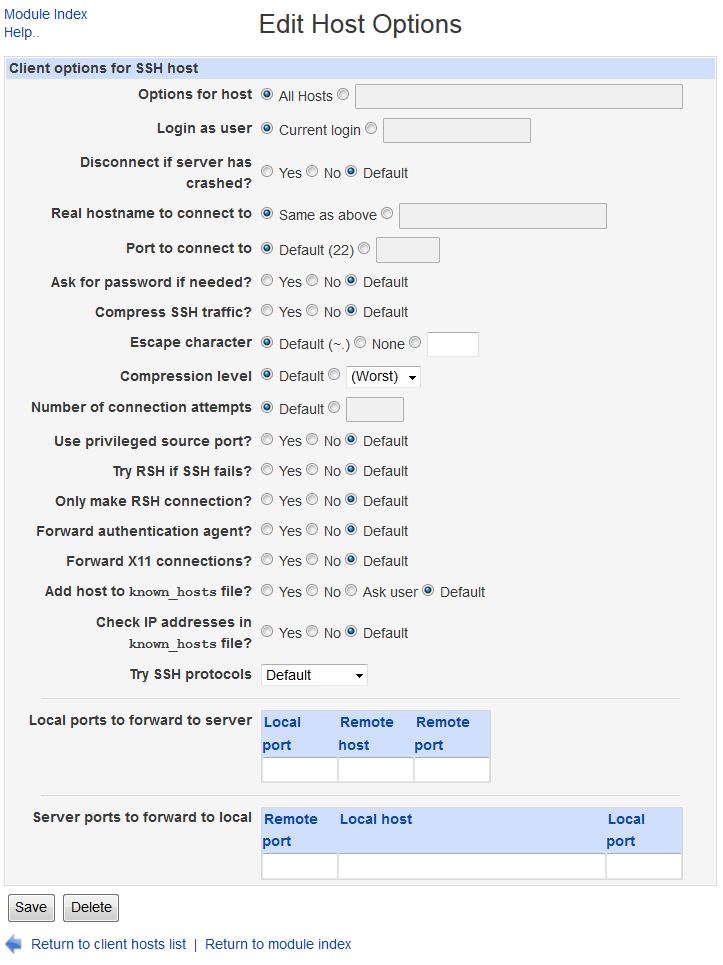 After a set of host options is created, an icon for the host will appear on the Client Host Options page. You can click on this icon to bring up its editing form, make changes to the same fields and hit the Save button. Or to remove the host and have connections to it revert to the default options, hit Delete on the same form. It is also possible to change the defaults that apply to all connects by clicking on the special All hosts icon and making changes on the form that appears. Of course, some fields do not really make sense in this context, such as *Real hostname to connect to* and Port to connect to, and so should not be used.

Before a Unix user can use certificate authentication to login to an SSH server, he must generate a private key with the ssh-keygen command. This module can be configured to work with the Users and Groups module to run this command for all newly created users. If your network uses NFS-mounted home directories, this will allow new users to login to other hosts without needing to supply a password with no further setup needed. To configure the setup of SSH for new users, follow these steps: 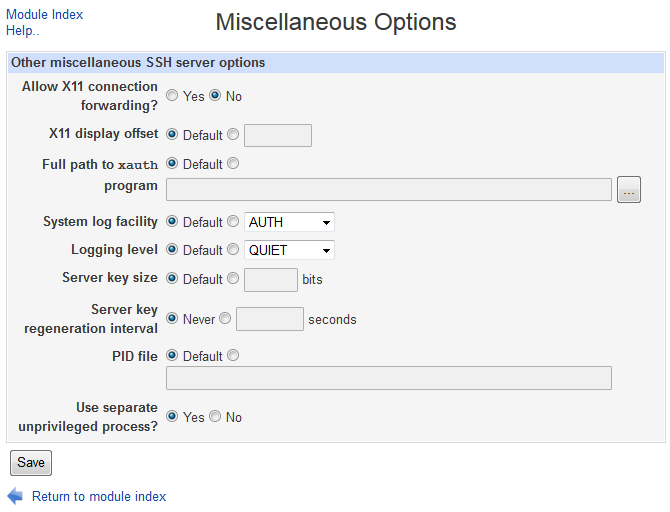 This page contains options that don't fit into any of the other categories. Some of the less obvious options but useful are :

Allow X11 connection forwarding?
If set to Yes, users that make an SSH login from a Unix machine will be able to run X applications on the server and have the X connection tunnelled back through the SSH connection to their local display.
System log facility
The syslog facility that is used to log error and information messages from the SSH server. This can be used in conjunction with the System Logs module to control which file SSH messages get written to.
Server key regeneration interval
How often the SSH server re-generated the key used for encrypting connections. If you are paranoid about security, set this to a lower number.