RAID (which stands for Redundant Array of Inexpensive Disks) is a method for combining multiple partitions on different disks into one large virtual device, also known as a RAID array. This has several advantages:

The different types of RAID configuration are called levels. The levels supported by Linux are:

Concatenated or Linear
In this mode, all the partitions in the RAID array are combined end-to-end into one large virtual device. Data written to the device will fill up the first disk, then go on to the second disk and so on. Linear mode does not generally make data access any faster, as all the blocks of a file being read or written are likely to be next to each other on the same disk.
RAID 0 or Striped
In striped mode, multiple partitions are also combined into one large device as in linear mode. However, data written to the array will be spread evenly across all disks, so that reading or writing a single large file is much faster. Ideally, if you had 5 disks in your striped RAID array then accessing data would be 5 times faster. The only problem with this mode is that it does not deal well with disks that are not all the same size - any space on a disk that is larger than the rest will still be used, but only at its normal speed.
RAID 1 or Mirrored
In mirrored mode, every partition in the array contains exactly the same data. This means that in the event of a disk failure, your data is safe even if only one disk survives. The down side is that under normal conditions most of the disks are wasted, and the usable space on the array is only as big as the smallest partition. Reading from a mirrored array is as fast as reading from a striped array, but writing will be as slow as the slowest disk due to the need to write all data to all disks simultaneously.
RAID 4 or Parity
Parity mode is rarely used, as it offers no real advantage over RAID 5. It provides protection against a single disk failure and increases read speed but not write. A RAID 4 array can survive the loss of any one disk because it dedicates one disk to the storage of parity information, which can be used to re-construct data on other disks if one fails. Because all writes to the array cause a write to this disk, it becomes a bottleneck that slows done the entire array.
RAID 5 or Redundant
This is the most useful RAID mode as it provides protection against a disk failure, increases read and write speeds, and combines multiple partitions into one large virtual device. A RAID 5 array can survive the loss of any one disk without the loss of all data, but at the expense of sacrificing some space on all the disks for storing redundant information. It is faster than linear mode, but not quite as fast as striped mode due to the need to maintain redundancy.

This chapter only covers the configuration software RAID on Linux. If your system has a separate hardware RAID controller card or external array, you will need special software to set it up. Virtual RAID devices on hardware controllers will show up in the Partitions on Local Disks module for partitioning, just like any real hard disk would. They will not be visible or configurable in the Linux RAID module.

This module allows you to create, format and delete RAID arrays on your Linux system. Like the other hard-disk related modules, it can be found under the Hardware category. When you enter the module, the main page will display existing RAID devices (if any) as shown below.

If Webmin detects that the commands that is uses to setup RAID are missing from your system, an error message will be displayed on the main page of the module instead. Most Linux distributions should have a package on their CD or website containing the raid commands though. A different error will be displayed if your Linux kernel has not been compiled with RAID support. In this case, you may have to re-compile the kernel with RAID supported turned on.

Assuming all the necessary packages have been installed, adding a new RAID device is relatively easy. The steps to follow are :

Existing RAID devices that are not in use can be deleted or de-activated by clicking on their icon on the main page of the module, and pressing the Delete appropriate button. Deleting a device will cause any data stored on it to be lost forever. 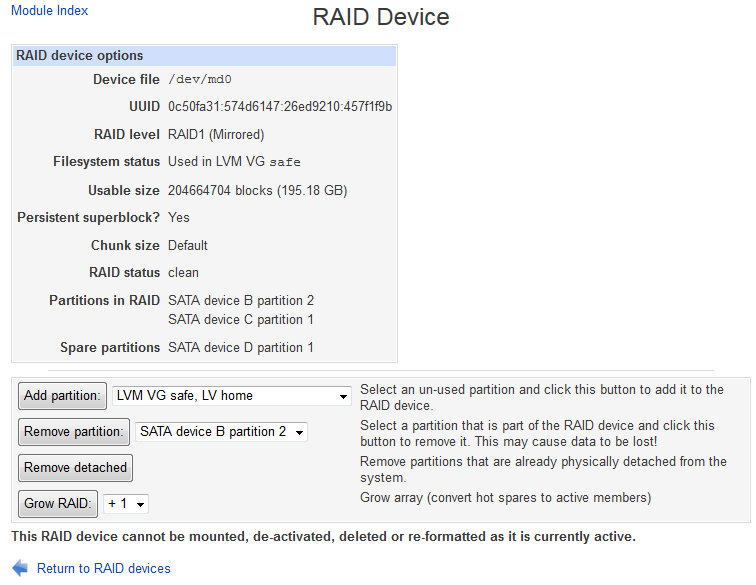 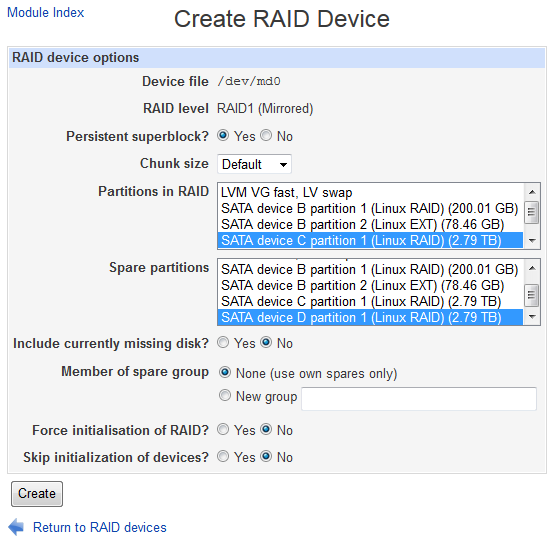 Linux RAID usually keeps its configuration in /etc/mdadm.conf. For a two-disk RAID1 configuration using partitions /dev/sbb2 and /dev/sdd1 the contents will look like: