From Webmin Documentation
(Redirected from LDAPUsersAndGroups)
Jump to: navigation, search

The most complex part of using this module is configuring it to talk to your LDAP server. By default, it will attempt to auto-detect the settings by looking at the LDAP client settings on your system, documented on the LDAP Client page. The LDAP Users and Groups page is located under Unused Modules as long as the LDAP Client is not detected.

If autodetection fails (perhaps because the LDAP server is not one of its own clients), you will need to configure the module manually as follows:

Assuming that all your settings are correct, the module should now display a list of existing users and groups, with links to add new ones. From here on, it can be used exactly like the Users and Groups module. 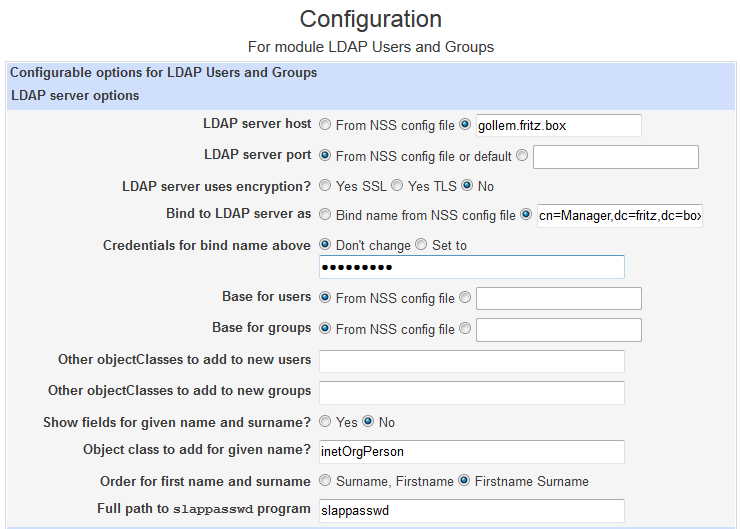 This module is essentially the same as the Users and Groups module. However, instead of modifying your systems /etc/passwd and /etc/group files, it talks to an LDAP Server (such as OpenLDAP) and modifies users in the server's database. At the moment, it assumes that you already have an LDAP server setup with base DN's created for your users and groups.

This form allows you to create, modify or delete many users at once from an uploaded or local text file. Each line in the file specifies one action to take, depending on its first field. The line formats are:

In create lines, if the uid field is left empty, Webmin will assign a UID automatically. If the gid field is empty, Webmin will create a new group with the same name as the user. The username, homedir and shell fields must be supplied for every user - all other fields are allowed to be empty. If the passwd field is blank, no password will be assigned for the user. If it contains just the letter x, the account will be locked. Otherwise, the text in the field will be taken as the cleartext password and encrypted. In modify lines, an empty field will be taken to mean that the corresponding user attribute is not to be modified.